Update your passwords and keep the list of logins and passwords where they will be easy to find should you fall sick.

Find and collect copies of your will and advanced medical directive, if you have them—and if you don’t, get one now.

Write out what you want people to do should you be too sick to take care of yourself or those you’re responsible for —  who to call or email, who should care for your animals.

Write out what you want done if you die.  Be clear.  You probably won’t be the only person being grieved.  Note if you have life insurance and what the carrier and policy numbers are, so your final care won’t be a burden for others.

And probably most importantly, tell those you care about that you love them.

Be well.  But if not, be prepared.

While the warm season grasses rise above last year’s stubble and the trees are beginning to leaf out in earnest, all of the ground layer of plants are grabbing sunshine while they can. The meadow is sporting blue eyed grass (Sisyrhinchium), violets, pussytoes (Antennaria), and wild strawberries (Fragaria). The cool season Junegrass (Koeleria) is already spreading its pollen, along with all the Carexes. In the woods, the violets are joined by a delicate carpet of bellwort (Uvularia).

The redbuds are wrapping up; as hot and dry as it has been, those flowers won’t last much longer. The dogwoods are well into their season. I’m hopeful we’ll get some of the rain forecast for the coming week, or these won’t last long, either. The highbush blueberries have only just gotten started. I don’t think the groundcover blueberries have opened yet.

In the greenhouse, I’ve transplanted the peppers into larger pots. It may be hot, but I don’t trust that we won’t have a sudden cold snap, and these plants take a long time to reach plant-out size. I’m not taking that chance. This year’s varieties are sweet peppers Super Shepherd, Sweet Banana, Corno di Toro, and Ashe County pimento, and hot peppers Jalapeño and Tiburon poblano–most of them aren’t locally available.

Today I also sowed the larger portion of the plants I’ll be setting out in three or four weeks. So many seeds! We’ve got six varieties of tomatoes (slicers Vinson Watts, German Johnson, and Illini Star; plums Illini Gold and Black Plum; and Pink Princess cherries), three varieties of tomatillos (Everona, Cisneros Grande, and Purple), and herbs Thai and Genovese basils, catnip, borage, parsley, and cilantro.

I’ve started another several pots of the Daucus carota ‘Dara’ I flipped for two summers ago in hopes of actually getting a decent stand of them this year. I also started a bunch of Red Drummond phlox, something that came up on its own from a set of plants I purchased elsewhere and which I liked so much I located a source to start my own crop. And for the bees I’ve sown three marigold varieties (Jaguar, Spanish Brocade, and seed saved from marigolds that self-sowed in the garden a couple of years ago), Tithonia, and two varieties of sunflowers (Tiger Eye and Lemon Queen).

Later this week, I know I’ll be laying hoses and running water out to the garden, even though the outside beds won’t be in use for another couple of weeks. There’s only just so much hauling of jugs of water a person is willing to do, and I just doubled my watering duties.

Carex pensylvanica and Nassella tenuissima along the path.

The other morning, it was 24F in my corner of the world, the second or third frosty morning in a row. The little garden behind my house – the one visible from the kitchen window, and called the winter garden because it’s the only one I spend much time with in winter – has an increasing number of native plants in it. There are several Carex pensylvanica in there, all self-sown.

On this particular morning, I happened to be checking the plants in the winter garden, looking to see which ones had survived the weather. I blinked, then leaned closer to the Carex. Damned if it wasn’t blooming.

I’m pleased to announce that I am now a certified Chesapeake Bay Landscape Pro! The program involves a rigorous series of practicums (practica?) and testing, and emphasizes a dedication to sustainable landscape design.

Of course, climate change being the juggernaut it is, deliberately setting out to not only maintain, but to actively improve the conditions in which we live is becoming more and more important.  Let’s not kid ourselves:  the very air and water are at stake, here.  The combination of greed and a simple lack of education on what really matters – how what we do, the choices we make, affect everything around us – degrade everything we know and love every moment of every day.

All is not lost, however.  Changes we began to make two decades or more ago have made our water safer, our air cleaner.  It’s returned the bald eagle to a common sight along waterways.  It’s reducing sediment, nitrogen, and phosphorus in the water that runs off into the Chesapeake Bay, and increasing the numbers of native oysters in beds of native grasses replanted along the Bay’s shallow waters and the numbers of crabs and fish whose babies grow up in those grass beds.  It’s bringing the Bay back to you, and me, and everyone around us.

We must not give up.  We cannot simply shrug and say, Oh well, at least today is pretty.  Our children and their children won’t be able to say the same if we don’t work to make our landscapes truly sustainable.

I, for one, have hope that we can slow this juggernaut.  I think we can help all life adapt as inevitable change continues.  If you want to talk about sustainability in design, or want to see what your personal landscape can do to help with the greater battle, give me a call.  If you want to read up on the subject, allow me to direct you to Dr. Douglas Tallamy [Bringing Nature Home:  How you can sustain wildlife with native plants], Larry Weaner [Garden Revolution:  How our landscapes can be a source of environmental change], and Claudia West and Thomas Rainer [Planting in a Post-Wild World:  Designing plant communities for resilient landscapes].

Yes, it’s a pretty day.  Let’s make sure tomorrow is, too.

The ruins garden waterfall at Chanticleer

Hang onto your hats, Central Virginia folks! The weather’s weird this year, weirder than it’s been in a while. Thanks to accelerating climate change, it’s likely to continue being weird for the foreseeable future.

So, you may ask—why should you care? For any number of reasons, but specifically in a landscape vein, I think it’s important to note that climate change is pushing the temperature zones northward. Plants which were barely able to handle summer’s heat and humidity in years past are going to be even more stressed, and some will probably have to come off our list of reliable species for our zone 7A or B (depending on where you live).

Additionally, you should expect to get heavier, and more infrequent, rain (or snow) events throughout the year. This means longer periods without rain, too, so keep an eye on those plants in your garden which tend to droop anyway without moisture; water them, or replace them with something better adapted to droughts. Preferably native plants, please! Natives are already adapted to local temperatures and moisture levels and, while those things are changing, the natives are better positioned to do well overall than something not from our local area. In short, you’ll have to water and fertilize a native plant less, and you’ll spend less time fussing over it. Want low maintenance? Plant natives.

I know I'm not the only one making the journey from LiveJournal to Dreamwidth, given the crazy climate of the day. I look forward to seeing who also came across, and to building a vibrant community on this new soil.

It seems the time has come to complete the switch over to Dreamwidth and away from the possibility of interference by, or my unwitting contribution to, malicious parties, so please consider this a final note on this journal. You can find me from this point onward at Dreamwidth under the same name (Clarentine). All other means of contacting me remain in effect.

(If you're also on DW and I haven't yet stumbled upon your journal, feel free to shout at me so I can add you!)

I will miss my LJ contacts and reading friends. LJ was a rocking place in its heyday. Too bad the diaspora could not be recovered. Adios - hasta mañana.

Hornworms to the left of me, hornworms to the right--the carnage was everywhere. Tomato plants raised denuded stumps to the sky, crying out for help. Frass littered the scene.

I surveyed the terrain and struck! One hornworm. Two. Three, four, in quick succession. Then, employing an old scout's trick, I crouched and moved in closer.

The enemy thus revealed was appalling. Well-hidden, they had only to wait silently, they thought, for their natural predators to retreat once more, convinced that all was as it should be.

Woe betide those overconfident in their camouflage! I inched nearer, poised just so, and then snapped off a series of fast assaults. Eight-ten-twelve rapidly added to my coup. Fourteen. Sixteen. Eighteen!

At the end of that morning, under the pitiless bowl of cloudless July sky, I tallied my feat: four and twenty they numbered, brilliant in their sleek, striped skins, their lacquered horns raised uselessly against an unexpected foe. Dripping in gore, I escorted my prisoners to their ultimate fate.

And the chickens loved every one. 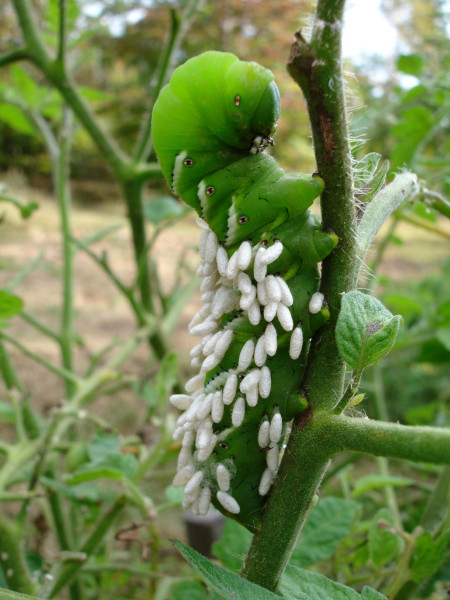 Whew! Now, that was a day. I've been to a client's house to measure out the front yard for a base map - thank you, T., for your help. Bought and ate bagels. Drafted up that base map and did some preliminary work on the new circular driveway loop.

Out in the greenhouse, we got the new strawberries watered and set up ten flats of greens: Tyee spinach and Lacinato (both standard and variegated) and Red Russian kale. Screwed down some of the support frame that came unmoored in last week's tornado-y winds. Cleaned the chickens' waterer out and refilled it and their feeder. Dug up a mess of weeds from the onion and garlic bed and fed them to the chickens (who know to watch from that corner of their run when I go into the garden).

Back at the house, we refilled the kindling boxes for the woodstove and refilled the water jugs that live in the greenhouse, and finally I mixed up the latest batch of dog bikkies.

Nine degrees this morning - rising to ten just before I left for work. Yay. :-/
Collapse